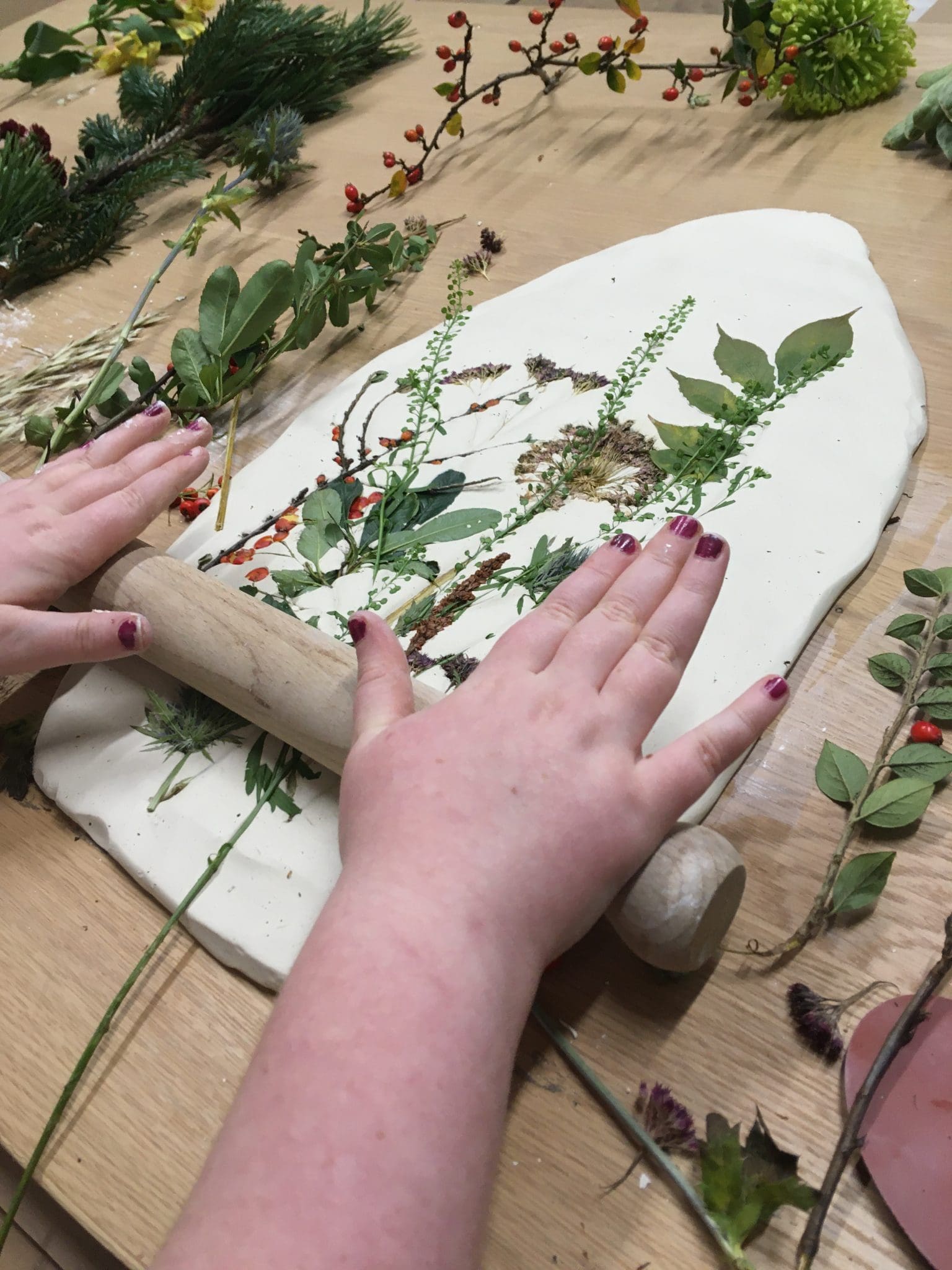 Well, it’s been a cold and blustery couple of weeks thanks to Storm Eunice.  As a working mum, I’ve found myself kid-locked during this half-term.

Three Children. Add in miserable weather. Not exactly conducive to running a business. However, I have a fabulous team behind me and buckets of gumption to get me through. Oh and Tim. I suppose he does help a bit.

That said, I have enjoyed some wonderful mother daughter time this week! My Evoline and I spent Wednesday afternoon of this week enraptured in some fun with plaster. I introduced my little one to the magical art of flower plaster casts.

We had spent the morning collecting snowdrops in Auckland Park, enjoying the bright heatless sun. Callum attempted to pick some accompanying leaves but ended up grappling with a nettle. Cue me wading through grass looking for a dock leaf as my child wails loudly to passers-by.

Dock leaf found, the troops and I all trudge back to camp Arnold to finally put the mornings findings to good use. Each of us had our own pancake of clay to use and the assortment of flowers and leaves where dumped ever so ceremoniously in the middle of the table.

We began to press the tightly sealed buds and fly-away petals and of course the freshly picked bunch that we had acquired earlier on. Evoline more than anyone was so engaged with the process. She laid her flowers, changing the pattern a few times, her little head tilted in concentration. She would have the flowers all arranged perfectly, stand back to view her creation, before shaking her head and starting over.

When, at long last the flowers were all in their places, she was contented as she started rolling them flat. Callum on the other hand was sickened off by plants after this morning’s sting and had resorted to putting grass in Iona’s hair and telling her there were spiders in it. How lovely!

He was much more excited however, when it came to pouring the plaster over their creations. Though Evoline poured hers gently, not spilling a drop, plaster did end up sloshing everywhere.  I’m so relieved that I had the maternal foresight to put newspaper down before getting started.

After succeeding in making a complete mess, we went upstairs to get hosed down while our artwork dried. I hope you enjoy these photos of our little family workshop. Time like this is so invaluable. For all the mishaps and mess, I wouldn’t trade it for the world!

This website uses cookies to improve your experience while you navigate through the website. Out of these cookies, the cookies that are categorized as necessary are stored on your browser as they are essential for the working of basic functionalities of the website. We also use third-party cookies that help us analyze and understand how you use this website. These cookies will be stored in your browser only with your consent. You also have the option to opt-out of these cookies. But opting out of some of these cookies may have an effect on your browsing experience.
Necessary Always Enabled
Necessary cookies are absolutely essential for the website to function properly. This category only includes cookies that ensures basic functionalities and security features of the website. These cookies do not store any personal information.
Functional
Functional cookies help to perform certain functionalities like sharing the content of the website on social media platforms, collect feedbacks, and other third-party features.
Performance
Performance cookies are used to understand and analyze the key performance indexes of the website which helps in delivering a better user experience for the visitors.
Analytics
Analytical cookies are used to understand how visitors interact with the website. These cookies help provide information on metrics the number of visitors, bounce rate, traffic source, etc.
Advertisement
Advertisement cookies are used to provide visitors with relevant ads and marketing campaigns. These cookies track visitors across websites and collect information to provide customized ads.
Others
Other uncategorized cookies are those that are being analyzed and have not been classified into a category as yet.
SAVE & ACCEPT
Powered by